THE BEST GIFT THAT MONEY CAN BUY!
Login

Delivered To Over 40 countries, Market Leader With The highest Customer Satisfaction Rate.

Delivered To Over 40 countries, Market Leader With The highest Customer Satisfaction Rate.

BE IT A PRESENT TO YOUR LOVED ONES OR A REWARD TO YOURSELF, 3D PRINTED FIGURINES ARE THE BEST GIFTS. UPLOAD YOUR PHOTOS AND WE TAKE CARE OF THE REST! THE MOST AMAZING GIFT THAT MONEY CAN BUY

BEST GIFT THAT YOU ALWAYS WANTED TO GIVE!

WE HAVE PARTNERED WITH AFFIRM!

Find the product that you love and simply select "Pay over time with Affirm" as your payment method during checkout. You'll see your monthly payment amount before you confirm your payment plan, so you'll know exactly what you owe upfront. Family 3D Printed Figurines: Capture the memories of your family in 3D and cherish them for a lifetime.

✔️  A 3d printed family/group figurine is a life-like, super realistic replica of a set of people, crafted only from a few pictures. We are the world’s first to create these one of a kind sculptures that have a minimum accuracy of 90%. Our figurines range from 5 to 12 inches in height. The higher the size, the better the detailing.

✔️  Capture the special moments spent with your family and preserve them for a lifetime. Replace any 2d picture with our true to life  3d figurines, the future of photographs and celebrate togetherness with our amazing sculptures.

✔️  A gift crafted perfectly with precision leveraging the combination of technology and art to celebrate motherhood, fatherhood, the love for our partners, friends, colleagues and every human relationship & occasion. Immortalize special moments and cherish them for a lifetime.

✔️  Why not get the ideal gift for your family, who's always been there for you! A chance to buy happiness for the most special people in your life.

✔️  Congratulations, you are about to add something really special to your life and make an impact. And yes, do not miss out on the 10% Discount available for a limited time.

✔️  After all, we are a celebration company. We celebrate love and human emotions from the first cry to the last breath.

For family figurine orders, please email the photos after placing the order at contact@my3dselfie.com with the subject of the email being your order number.

It is very nice. I expected a little more detail in the face but am satisfied overall

I ordered a matching pair of figurines for my two sons as Christmas gifts. Quite accurate replication. The ONLY issue was that they gave my oldest son a bit of a lantern jaw. I wish I had been given a chance to review and correct this before the final product shipped. But I still very much like the end product

The customer service is phenomenal! The craftsmanship is excellent. The likeness is very close on one of the figurines, but not so much on the other. Overall I am glad I bought the statuette.

I received my order today Nov 4th. I am pleased to inform you that your team did an excellent job. I appreciate all of the time that was invested in creating such a life like statue. I wish your company continued success in the future. Thank you so much.

I am very satisfied and proud of my purchase. When I handed the figure of my fiancé and her deceased grandmother she teared up and hugged me in approval. It was her birthday gift.

I am so pleased with the result of our 4 person group figurine. I submitted a photo with all 4 of us holding fish and the 3D figure that came back is very realistic and true to the picture that I sent in. Please see the attached photos of the perpetual trophy the figurines are now on top of and the photo that indicates how accurate your company was in producing our figure. I can’t wait to use your service again. 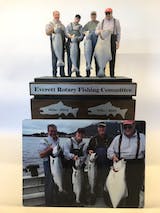 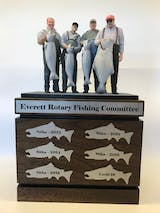 Let customers speak for us

from 317 reviews
i love this company

great craftsmanship high quality great customer service i recommend this product for everyone i always wanted a doll of myself an action figure of me and now i finally got them thank you 3dselfie.com

HeadShots
Such a precious little thing.

I wasn’t sure what to expect with the little bust of my best friend. It’s the smallest size & something I’d never purchased before. I’d seen other customers post theirs & loved the results so I gave it a try. I was not disappointed. My little bust is perfect. It looks exactly like my best friend from all angles & if he were here, he’d love it, too. It’s such a beautiful way to honor my passed loved one. Now that I have this little one, I want to order a larger size! I am impressed & happy beyond measure.

I didn’t know which star was the most (1-5). It was the best. It is so lifelike I have cried many times. I greatly appreciate the artistry and will use your company again.

Dogs figurine
A smile on my face.

I was extremely happy when I opened the box and definitely satisfied with the video game action figure. The figure looks just like the photo and you have gained another future customer looking forward to more figures. Thank you! My3dselfie.

Dogs figurine
Beyond my expectations.

I couldn't be happier, I ordered two more for my two grandkids. Also will have my great granddaughters done as well, they change so fast!

I love these elephants! More than what I expected, I collect elephants, these are my favorite thus far!

I am so pleased! I got a 3D printout of my husband's head shot and I absolutely love it! It's adorable! It captured all his features and detail. He even agrees that it looks like him.

Communication with the team got a bit disorganized at times (for awhile, I was recieving updates for someone else's order, and was never shown the final render for approval pre-printing despite recieving an email thanking me for approving it) which made me worry a little about the final outcome.

With that said, though, I can tell a lot of effort was put into my figure and that the references I provided were followed as closely as the 3d sculpter was able. I was pleasantly surprised that the features I expected to have been simplified or left off entirely for ease of production were, instead, done in perfect detail! They even got his hairstyle and the design of his weapon correct!

If I had to make a complaint, I would say the neck is a bit too long, but this is, indeed, an 85% accurate figurine, as was advertised.

Thank you to the staff at my3dselfie for your work to bring my favorite character to life!

The 3D urn figurine is a perfect replica of our little Husker (a Westie/Carin Terrier mix). It is the perfect addition to the mantle on our fireplace. Our entire family loves it!

3D Selfie
Statue of my Yorkie